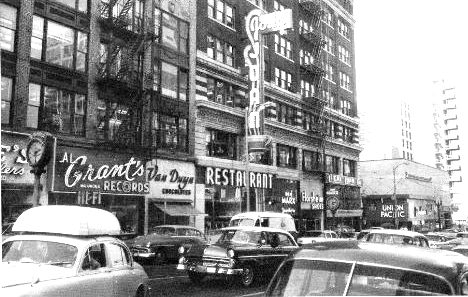 Shown here is a view of SW Broadway around 1958.  This is between Alder (not visible) and Washington (down the street where the Union Pacific  sign can be seen).  The businesses on the left that are visible are (from South to North), Florsheim Shoes, Dan Marx jewelers, Jolly Joan’s restaurant, Van Duyn Candies, Al Grant’s Madrona Records, and Zale’s Jewelers.

Al Grant was my father and he had recently moved his store from it’s old location on the corner of North Broadway and Williams Avenue.  On the sign over the shop, the blurry lettering to the left of “RECORDS” is the word Madrona, which had also been the name of the old store on Williams.  I love the sharp ’55 or so Ford in the center of the shot, an approx. ’48 Plymouth or Chrysler parked in front of his store, and further down the street, a white ’55 or ’56 Cadillac.

And there were clocks in front of each jewelry store.  The Zale’s one (visible  on the far left, just to the left of dad’s store in this photo) is still there to this day.

All those businesses are gone.  Some lasted longer than others…like Zale’s and Dan Marx (Marx made it into the 21st Century).

My dad had gone into the record business in the late 40’s at his old old location which was a furniture store in the Kenton neighborhood he co-owned with his brother Larry.  That was Grant Brothers’ Furniture.  To make a serious go of it in the record biz, he opened the Williams avenue shop in around 1950.  He specialized in what in those days was called “race music:”  Bo Diddley, Muddy Waters, Dinah Washington,Joe Williams, Ray Charles. He also had the biggest jazz collection in the state.    People could listen to records right there in the store.    And they did.  And they danced.

By 1957 he was ready to move across the river to the downtown store.  Where the Williams store was functional, the new downtown store was fancy.  It was the time of tail fins on cars and dreams of space travel.  So the new record store was suitably space-aged with groovy light fixtures that looked like Sputnik,  and cheeky displays.  The country music section was housed in a small-sized replica of a covered wagon, my dad’s way of winking at his own disdain for the genre.  Where the listening record machines at the Williams store were just out in the open contributing to a party atmosphere, the downtown store had private listening booths.  For “Long Hair” (classical) music, there were roomy booths in the back that played 331/3 rpm discs.  The 13 smaller booths for playing 45’s were along the long south side of the store.

As the downtown store opened, I was a 5th grader.  And I was totally into music and the record store.  Part of our father-son ritual was going to the store on Sundays when, like all other businesses in town, the shop was closed.  I would listen to records for hours while he did paper work.  This was in the days before shrink wrap which meant I would just pick out a record and go listen.  Sometimes we took records home, listened for a while and then brought them back to the store.  It was like a library but more cool.

I listened to Miles Davis and an exciting new saxophonist named John Coltrane.  I also liked Clyde McPhatter and Buddy Holly and Huey ‘Piano’ Smith.  I would  sneak copies of Kermit Schaeffer’s Pardon My Blooper series into the listening booths.  This was a several volume series of radio and TV gaffes that were both  naughty and funny.  Like the famous radio kid’s show host who, after signing off and thinking his microphone was dead, could be heard to say “….that oughta hold the little bastards for a while.”

I remember a stereo sound demonstration that dad hosted in a room in the Benson Hotel.  While the deep-voiced narrator intoned “…and now listen to this freight train…etc,” we could hear the train chugging along in the distance which seemed to be far to our left…and then miraculously move closer, getting louder and then roaring along from the left side of the room to the right and then off into the distance.  It was breathtaking.

Shortly after that, my dad had a stereophonic components demonstration room set up in a room just above the main part of the store.  I couldn’t get enough of freight trains and rockets and big crowds and big music that boomed from two speakers placed 10 feet apart.  That was another thing.  Compared to the Williams Avenue store, the downtown store was BIG!

An interesting feature sticks in my mind.  When you walked into the downtown store, you were greeted by an all-star wall display of Portland’s top radio jocks smiling down at us from their framed countenances.  Personalities like KEX’ Barney Keep, Ray Horn (“the horn blows at midnight”), KGW’s Bob McAnulty and my favorite from KPOJ, Dick Novak (“open the door Richard….”).  Dick used to host a show live from Amato’s Supper Club on the southwest corner of  SW Main and Broadway. When a couple of Borscht Belt comedians toured through Portland, as was customary with us, we had them over for dinner.  The following night we went with them to their show at Amato’s and Dick Novak talked to us (my Dad, brother and I) on air!

(Below from right to left, my mom, Johnny Mathis, my dad and Unknown Radio Guy)

My dad always got free tickets to the Norman Granz’ Jazz at the Philharmonic concerts.  My mom took me to the Paramount to see Lenny Bruce.  The record store and associated culture were a huge part of my life.   I spent summer days downtown.  I would take the Irvington or Broadway bus, go  to a movie, then to Meier & Frank’s to check out the new color tv’s, and then on to dad’s store to hang out until it was time to close and go home. One of those  times in  1962, when we were driving up into our driveway, my dad solemnly informed me that he was closing the store.  I looked at him bewildered and hurt and couldn’t believe what he was saying.  “Why?”

I came to realize long after, that a convergence of market forces were at work against the small retail store.  Especially record stores.  Fred Meyer, Meier & Frank…even some pharmacies were selling records.  Rack jobber middlemen had come into the picture to service these places and were probably offering  deals to retail outlets that could place big orders.  And Madrona got hit hard by theft from outside and inside. At least one employee stole from us.  And some shoppers couldn’t resist the temptation that the privacy of the listening booths offered.  One classmate of mine at Grant High School who sat by me in study hall boasted about all the records she pilfered from our store

Dad’s main competition had been Sixth Avenue Records which was right around the corner from our shop.  Owners Marvin and Tommye Gribble had  rough go of it too but managed to hang on for another 10 years or so.

The closing of the store was a big loss emotionally.  It was like a death in the family.  I’ll never forget that Spring day in 1962 that we held a going-out-of-business sale.  People were lined up around the block.  Music freaks and afficionados of all stripes started major collections on that day, some of which turned into future record stores.  For me, that event was akin to a funeral.  A very sad day.